It was a strange event in several ways.

Strange item #1:  Half the field got paid something.   In most tournaments, only the top 10% of finishers get paid, while the other 90% go home empty handed.  In this tournament, the top 10% profit, but the top 50% get a minimum of 2/3 of their buyin back.  I have mixed feelings about this format, but that’s another discussion for another time.

Strange item #2:  The eventual bracelet winner almost busted out against me on Day One.  Brandon Wittmeyer, who met me 9 years ago through a mutual friend (but had barely seen me since), held KK on the river on a jack-high board, and was facing an all-in bet from me.  Had he called, he would have busted, as I had more chips than he did.  Many players would have called off here, and Wittmeyer was  VERY close to doing so, taking about 5 minutes to think about it.  Eventually, he reasoned out loud that his memory of me in 2006 told him that I was likely to have a very strong hand in this spot, and he laid it down.  He was right, as I had a set of 4s, and this fold was the ultimately difference between him min-cashing and winning $200,000 plus the bracelet for the event.

Strange item #3:  At one point in mid-late in day 1, the top two chip leaders in the event were the co-hosts of the same internet radio show.  And not just any internet radio show — but MY internet radio show, PokerFraudAlert Radio.   I was #2 in chips with 70k (starting from 7500), and beloved co-host Brandon Gerson had the top spot at 74,500. 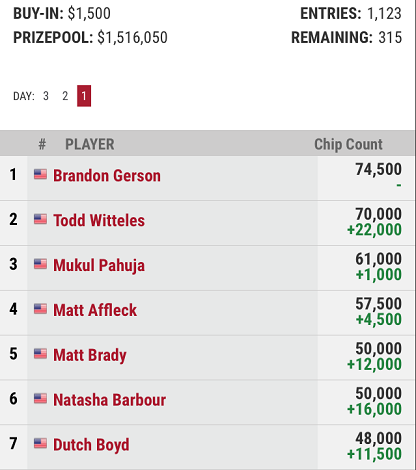 Strange Item #4:  I was all-in in three major spots during the event.  In all three, the huge underdog hand won.  The first two went my way.  I was all-in with 44 on a 8267 board against 88, and needed a 5 on the river to stay alive.  That gave me just a 9.09% chance to survive, and there came the 5 on the river!  Not too long after that, I was again short stacked, and got it all in with AJ versus AK and KK preflop — giving me just a paltry 8.78% chance of survival.  Amazingly, a jack flopped and another jack hit the turn, and I nearly tripled up.  Unfortunately, the huge favorite hand fared just as poorly when I held it.  In a huge pot all-in where I held AK and my opponent held KQ on a K234 board, he needed a queen to win , so I held a 93.18% chance of winning.  You know what happened.  Queen on the river, and I was down to almost no chips.  These were the only three major spots where I was all-in for significant chips and got called.  What was the chance of all three going to the underdog, as they did?  1 in 1838.  Wow.

Many expected me to be frustrated with that river queen, which if it hadn’t come, would have left me 50% above average chips with just 40 left in the event.  This was my chance to finally win a NL bracelet, and to make my first NL WSOP final table since 2006, and that horrible beat robbed me of it.

And yes, I was quietly frustrated, but at the same time, I was accepting of it.  I said out loud that I put down two very lucky beats of my own to get there, so I can’t complain too much when the reverse happens to me.  I wasn’t just saying that to sound like a good sport.  That’s how I really felt.

I felt that way because, in between the fortunate all-in survivals and the brutal eventual beat, I realized that I was already freerolling the event.  I should have been out — TWICE — but here I was with slightly below average chips with just 40 people remaining.  I thought about a story I was once told about a much more serious matter than poker….

The date was August, 1971.  A frantic young woman was at an emergency appointment at her OB-GYN’s office.  Still childless, she was on her second pregnancy.  The first ended in miscarriage a year earlier.  Now pregnant once again, the exact same miscarriage symptoms were presenting themselves at the nearly the exact same point in the pregnancy when she lost the first baby.

There was massive blood loss.  She knew that her chances of this baby’s survival were looking bad, but she didn’t realize quite how grim they were.

The doctor told her that the baby was still alive, but probably not for much longer.

“With the amount of blood you lost, and with the fact that you lost one just like this a year ago, unfortunately this one will very likely go the same way,” he explained.  “There’s about a 95% chance that this pregnancy won’t run to completion.  In fact, if you lose any more blood, the baby can’t survive.  It’s very surprising that the baby is even still alive after the amount of blood that was lost.”

Somehow the bleeding stopped.  Nor was there bleeding again at any point in the pregnancy.  Everything proceeded normally.  It is unclear what reversed the process of the almost certain miscarriage.  There was some fear that this incident severely damaged the unborn child, but he was born in early 1972, full term and completely healthy.

That child is still alive today, and hit the “river 2-outer” — a 5% chance — not for his tournament life, but for his actual life.  This child’s entire life is basically a freeroll.  According to the odds, he shouldn’t have even made it to birth.

I remembered that story as I sat with my chips, ready to take whatever bad beats might — and did — face me for the rest of Event #55.

I understood how lucky I was to even be there in the first place.  The child from the almost-miscarriage story sees it the exact same way.

And why shouldn’t we?  After all, we’re the same person.

One thought on “Freerolling life”